Steve Hughes - Are You Serious? 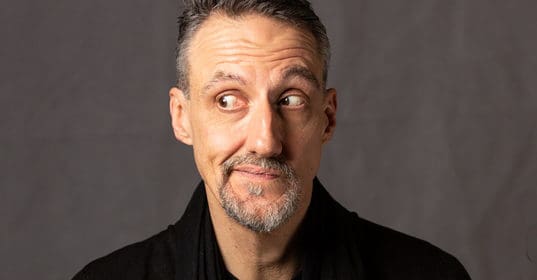 Internationally renowned stand up comedian Steve Hughes is known the world over for his hard hitting, take no prisoners stand up.

The inimitable ex-heavy metal drummer has been burning up the international circuit for the past 20 years, touring throughout Europe, Australia, USA, Canada & New Zealand to rave reviews and mutinous laughter.

After storming stages at prestigious invite-only festivals and selling out his solo tours worldwide, Steve returned to Australia in 2014 with a new show “While It’s Still Legal” which sold out at Comedy Festivals across the land. Most recently Steve wrote and performed his most personable and intimate show yet entitled “Nervous Breakthrough” which was filmed at The Enmore Theatre (Sydney) for his third comedy release.

He makes his long-awaited return to the UK in February 2020, and will be embark upon a UK tour in the Spring. Free-thinking, intelligent, opinionated: “Are You Serious?” will be Steve doing what he’s always done best; making the uncomfortable acceptable and the horrifying hilarious.

“An honesty and openness rarely seen among comics. His insights are spot on, his opinions are intelligent and his jokes are top class”
The Guardian

“Exactly what political comedy should be, intelligent, provocative, profound, and topped off with good, solid gags. See him while it’s still legal”
Chortle

For catering we team up with restaurant/tapas bar Les Pénates, just across the street from Marni Theatre. You can book your table here info@lespenates.be / 02 850 82 77 and mention you go to the comedy show at Marni, so that the waiters will know you have to be served before a certain time. Book early as this place is very popular and in high demand.